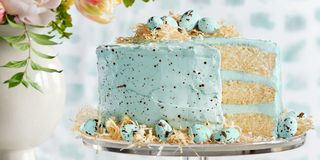 During a recent episode of TODAY With Hoda and Jenna, Jenna Bush Hager revealed that an awkward grocery store moment opened up a conversation about weight with her daughters that she wasn’t prepared to have. In fact, the 40-year-old had hoped to never discuss weight with her children—just like her own mother, former first lady Laura Bush, had done for her and her twin sister Barbara when they were growing up.

On Thursday’s episode, Hager shared a story with the audience about her two daughters, Mila, 8, and Poppy, 6. While picking up groceries with their mom, the girls noticed a photo of their mother on a magazine cover with a headline about Hager’s recent weight change.

Though it was evident that the young girls didn’t understand what the headline meant and Hager didn’t want to make a big deal about it in the busy store, one of the store’s employees chimed in, reading the headline aloud: “It says here, ‘Jenna dropped 30 lbs.’”

Kotb took a moment to applaud Hager for the way she handled the situation, noting that Hager had raised her daughters to not put so much value on the numbers on a scale. “You know what I love? She didn’t know what ‘lbs’ are,” Kotb said. “You didn’t bring it up.”

In fact, Hager said she doesn’t discuss weight with her children and doesn’t plan to start. “I will never. And I had a mother that never [did], and I still felt like a chubby child. But it wasn’t because of her; I think it was because I was chubby,” Hager said.

Hager shared that her own mother was always very careful when it came to word choice surrounding body image in front of her kids.

Kotb applauded this method of raising children and said, “By the way, that is huge. That is a big life lesson right there.”

Though Hager clarified that she hasn’t actually lost 30 lbs and the magazine cover was incorrect, viewers have commented on the talk show host’s health efforts. Earlier in the conversation, Kotb shared that fans of the show were stunned by Hager’s super-toned legs. The co-host wore a neon-green suit with shorts a few days earlier, and viewers couldn’t help but notice she had some serious muscle.

“What is happening? Are you doing squats? What are you doing? Kettlebell? What is it?” Kotb questioned her co-host.

Hager revealed she had recently been at the beach, so she’s a little tan, but she also works out quite a bit for strong, toned legs. She told Kotb she does an “old school” workout which she wasn’t able to demonstrate on the set. Hager described it as “Some squats, but you’re on all fours, which I can’t really show you right now.” She added, “You’re wearing leg weights like in the ‘80s and you’re kicking back, back, back.”

We love the way Hager focuses on a healthy lifestyle, and not on pounds. We can’t wait to see what words of wisdom she’ll share next!

Arielle Weg Arielle Weg is the associate editor at Prevention and loves to share her favorite wellness and nutrition obsessions.
This content is created and maintained by a third party, and imported onto this page to help users provide their email addresses. You may be able to find more information about this and similar content at piano.io
Advertisement - Continue Reading Below
More From Country Life
J.Lo's Abs Look Insane In This Crop Top
Kevin Costner Gets Candid About Yellowstone
Advertisement - Continue Reading Below
Kelly Ripa Dishes on Ryan Seacrest’s Girlfriend
The Finale of '1883' Sets Up a 'Yellowstone' Twist
Kaitlyn Dever Fans Are Loving Her Mini Dress Look
Zooey Deschanel and Jonathan Scott's Glam Look
Cameron Diaz Found 'Peace' After Quitting Acting
See Carrie Underwood's Stunning Grammy Performance
Jennifer Garner’s Go-To Plumping Moisturizer
Donnie Wahlberg Reflects on Blue Bloods Season 12